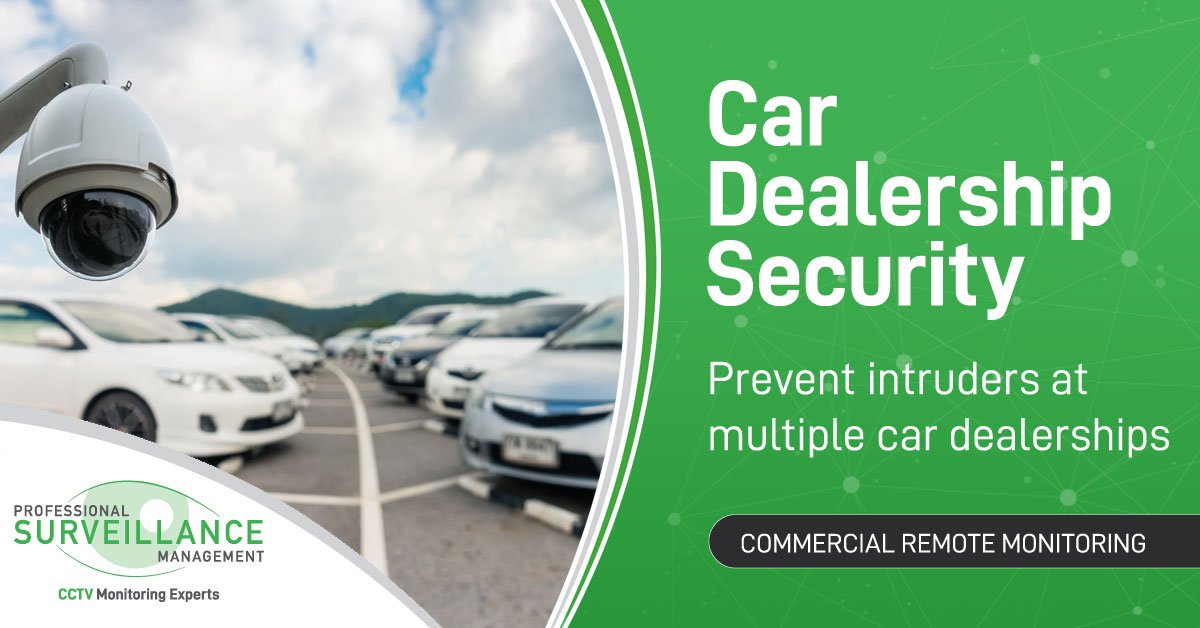 Car dealerships attract passers by at all times of day, even when they are closed, as they tend to be open-access sites without appropriate car dealership security, comprised of unfenced lots with scores of vehicles always on display. Although most of those who pass through the dealerships that we monitor during the night are there without criminal intent, our operators know from experience that every instance of unauthorised access is worthy of their immediate attention.

Due to the steady flow of human traffic, car dealerships can be left particularly vulnerable without adequate CCTV monitoring. Because their assets are expensive and kept in plain sight, criminal damage to vehicles, theft of tools, equipment, materials, automobiles and parts are all undeniable threats that can result in substantial financial losses and reduced profits. After all, in the eyes of thieves, an open lot filled with neat rows of unattended cars is a welcome invitation to steal.

This weekend, PSM intervened during three separate incidents at three car dealership sites, two of which are owned by a single client. The first involved two hooded men walking around the perimeter of the site, both of whom were carrying torches and neither of whom showed much of a response to our initial audio warnings; the police and keyholders were contacted without hesitation. By escalating the severity of our audio warnings, our operators managed to drive off the intruders.

During the second incident, a person was seen going to and from the main building and a van parked at the site boundary, though he suspended his suspicious operations upon having heard our audio warnings.

The third incident involved a person accessing a vehicle parked on site, and was dealt with in the same way we action all criminal activity. However, after having contacted the police and keyholders, our operators were informed by one of the latter that the person seen on site was the son of an employee, who was retrieving his wallet from his vehicle. Our client was pleased that our operators were on the ball, as always.

PSM recommends perimeter detection for car dealerships and similarly open sites. Perimeter detection ensures that all activity is picked up at the site’s boundaries before it has a chance to develop, thereby minimising the risk to your business and its assets.

Using a combination of CCTV cameras and motion detectors, perimeter detection is set up to:

Is your car dealership secure from potential threats?

Are you looking to reinforce your property with added security measures to combat opportunists and thieves?

Or are you in doubt about whether or not your property would benefit from perimeter detection?

If so, please contact Kerry Jones; she will be happy to discuss your site’s security requirements and advise you on how to keep your business secure. Effective security for your car dealership is just a phone call away!